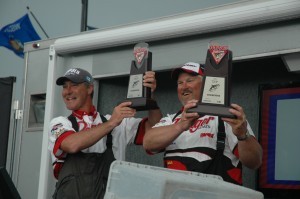 “This is awesome!” said Zwick, of Wrightstown. “We had a blast all week prefishing—what a way to finish.” He credited their teammates for helping locate top fishing areas and patterns while preparing for the competition, and praised the Oconto community for giving the MWC anglers such a warm welcome.

After their five-fish MWC limit weighing 25 pounds, 6 ounces landed them in ninth place on Day One, they rocketed up the leaderboard with 31 pounds, 11 ounces on Day Two for a 57-pound, 1-ounce total weight. It was not their first time in the winner’s circle. Zwick and Kobriger won the Cabela’s MWC World Walleye Championship on the Mississippi River at Prairie du Chien, Wisconsin, in 2011.

The Green Bay victory earned them the $15,000 first-place purse, which included $14,000 in cash plus a $1,000 Cabela’s National Team Championship Prize Package featuring a paid NTC entry, travel stipend, team jerseys and plaques. Plus, they earned a $1,000 Cabela’s gift card from the Cabela’s Angler Cash Program, $1,000 Ranger Cup contingency, $500 Lowrance Electronics award for being the highest-finishing team using a Lowrance HDS Gen2, HDS Gen2 Touch or Elite-7 unit, and a $500 Berkley Tackle Package for total winnings of $18,000 in cash and prizes.

“This feels really good,” added Kobriger, of Chilton. He explained that they relied on two main tactics to accumulate the winning catch. One was pulling spinner rigs tipped with nightcrawlers or Berkley Gulp! Pinched Crawlers in 18 to 25 feet of water. Their second strategy was trolling crankbaits including Berkley Flicker Shads over shallow weeds in 6- to 9-foot depths.

Kobriger credited their Lowrance HDS electronics for helping them pinpoint key areas, including emerging vegetation just six to 12 inches high. “We had an HDS 12 on our plotter and HDS 10 with StructureScan and sonar,” he said. “We couldn’t have found those shallow fish without them.”

Fellow Wisconsinites Bill Van Ornum, of Oshkosh, and Travis Wagner, of Wautoma, finished second with 52 pounds, 13 ounces, worth $6,600. In all, the top 20 teams shared $60,050 in cash, sponsor bonuses and Big Fish Pot winnings.

The team-format tournament offered two days of competition on Green Bay’s legendary walleye fishery, with one day reserved in case of bad weather. Each day, teams were allowed to bring their best five walleyes to the scale. A total of 915 walleyes weighing 3,583 pounds, 6 ounces crossed the stage during the tournament. Big fish was a 9-pound, 14-ounce beauty caught by the Oshkosh, Wisconsin, team of Michael Galligan and Stuart Wells, worth $1,012 from the Big Fish Pot.

Weigh-ins were held at Breakwater Park in Oconto. The Cabela’s MWC, National Professional Anglers Association, Pure Fishing and Zippo Outdoor Brands presented a Youth & Family Fishing Clinic immediately after the first day’s weigh-in. The first 50 youths received rod-and-reel combos courtesy of the NPAA. Adding to the excitement, the tournament was filmed for national television. It will air in the fourth quarter of 2013 on Federation Angler, on the NBC Sports Network.

Based in Ponca City, Oklahoma, the Cabela’s MWC is oldest running national walleye circuit in America. Cabela’s MWC is owned by The Walleye Federation and is open to two-person teams regardless of club or sponsor affiliation. Entry fees are $650 per tournament, of which more than 100 percent is returned to anglers at the qualifiers, World Championship and Team of the Year races. Registration remains open through the Sunday night prior to each tournament. For more information, visit masterswalleyecircuit.com, email info@masterswalleyecircuit.com, or call (580) 765-9031.