Snowmobile clubs are gearing up for season! 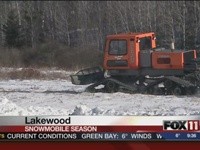 LAKEWOOD - With only a little snow on the ground in places, snowmobilers are ready for more.

In the Lakewood area, trails are not yet open, but clubs are gearing up for an early start to the season.

At the Paul Bunyan Riders Snowmobile Club in Lakewood, they're testing the grooming equipment. Recent snow in the area has people talking.

"Started out with about eight inches of snow, down to about four inches now, it's a good ice base under it," said Dave Thomson, Paul Bunyan Riders president.

Thomson says the area is on pace for an early season.

"Trails are not open yet, we're hoping, weather-permitting, on the 16th," said Thomson.

"This is the time of the year that our business is our absolute best. This time, throughout the winter," said Greg Weyers, Lakewood Motorsports owner.

Weyers says 30 sleds are in the shop.

"We have enough work to keep us busy in excess of a week," said Weyers.

Just down the road, the owners of TnT's Russted Nail hope the restaurant's location brings in winter business.

"We're on the snowmobile map this year and we have the trail cut out right in front of the parking lot, so we're hoping it crosses over," said Traci Lindstrom, TnT's Russted Nail owner.

"It gives a real big boost for all the business. Supper clubs, the eating establishments, bars, restaurants, and it's just phenomenal," said Thomson.

While many count on the snow, for now, they will have to wait.

"When machines get on the trails early, they tend to tear up the base, and when you lose your base in certain areas, you probably won't get it back for the season," said Joe Kampf, Red Arrow Snowmobile ATV Club president.

"A little help from mother nature and jack frost, and we'll be in good shape," said Kampf.

The Oconto County Snowmobile Alliance is made up of nine clubs, and maintains roughly 475 miles of snowmobile trails throughout the county.