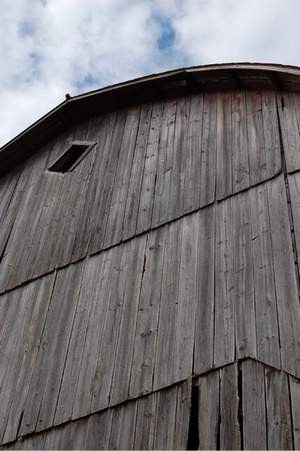 Don Demeny of Abrams said his in-laws, John and Cookie Konitzer, own an old barn, "the tallest one in Oconto County."

That sounds like a point of interest and a candidate for this series. Turns out, stories sprout from the barn at many turns.
The barn looks typical of many in these parts — the dairy barn gambrel roof (edge that curls), clean lines and weathered red sides. But this barn is big.

John Konitzer said, yes, he thinks it's the tallest barn – 52 or 54 feet — left standing in the county. He's owned the barn for 40 years. Importantly, he says previous owner Art Delzer knows more.
Indeed. Delzer came back to the barn to fill in blanks. He and his brother, Irvin, helped their father, Julius, and professional builders build the barn around 1942.

The barn carries many good memories, Delzer says.
That’s especially true after World War II, when he returned from serving in an engineer unit.
"From Normandy to Germany — walked it all the way," he says.
It was great seeing the barn again.
"You betcha," says Delzer, 87. "Glad to get back. Yep, you bet."
The barn is made of found material.
Its lower walls are filled with fieldstone from nearby fields. Such barn walls are fairly common.

More intriguing is the wood.
"The logs all came from out of the Oconto River when the Stiles dam went out," Delzer says. "We pulled the deadheads (sunken logs) out of the river."
The logs were headed to a mill in Oconto.
The age of the barn's wood is hard to determine and raises a question. The dam was built in 1925, but were the logs covered by water before that?

In "History of Oconto County," written by Richard Hall in 1876, there's reference to a mill being built at Oconto in 1845.
Logging in the area continued for half a century, with the river being used to transport logs. Pines were huge — some more than six feet wide and rising "straight up 100 to 200 feet before branching out," according to the Oconto County Reporter in 1909.
Some logs that the Delzers cut with their sawmill near the barn may have been submerged a really long time. Protected.
"After the lumber was cured like that, it did not rot like normal," Konitzer says.
"No, it dried out, and it was good," Delzer says.
And it lasted.

The barn is in "unbelievable good shape yet," Konitzer says.
Julius Delzer had the barn built extra tall. With 16-foot doors, wagons with loose hay piled high didn't have the top of the stack cut off by lower-slung doors.
"We had lots of room to take a big load of hay in," Art Delzer says.
The Delzer farm was 110 acres and ran 45 to 50 head of cattle.