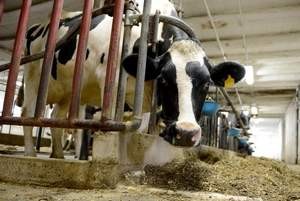 That’s the number of cows owned by Norman Acres, the host of the 2013 Kewaunee County Breakfast on the Farm on June 16. Large or small, the dairy industry — and farmers like Lloyd Hlinak and his wife, Claire — form the underpinnings of a multibillion-dollar business in Wisconsin.

“We want people to see what we do, come out here and have some fun and a eat a good meal,” Hlinak said this week. “I’m excited about it. It’s a big undertaking.”

Breakfast on the Farm has become a staple event of the summer in many Wisconsin counties. It gives farmers and the dairy industry an opportunity to showcase farms and products and bring people out to a working farm — something more and more Americans are further removed from.

This is the 31st edition of the Kewaunee County event.

Hlinak said he’d like to emphasize that farm operations, large or small, are run cleanly with both animal welfare and land stewardship among farmers’ paramount concerns.

Host farms run the gamut in size. Some have more than 1,000 animals, while others have a few hundred or — in the case of Hlinak — less than 60.

“I’m a small farm,” he said. “A lot of them have fallen off in the last few years ... I like what I’m doing and I have a nice setup. We’re set up to be efficient on this operation.”

The dairy herd is fed by crops coming off 221 acres of land planted to corn, soybeans, alfalfa and winter wheat.

While a self-described jack-of-all-trades, Hlinak has help on the operation from neighbors — Dave Lacrosse and Brian Klimesh — and his wife.

“When something breaks down, you’re out here until it’s fixed,” he said.

Dairy is a $26 billion industry annually in Wisconsin, part of a much larger agricultural industry that pushes $60 billion a year.

Each breakfast marks the culmination of months of work by people and volunteers with ties to the community and industry. Each county in Northeastern Wisconsin hosts its own event between June 9 and July 7.

Jordan Rank, co-chairman of the Oconto County Breakfast on the Farm, said he sees a group of people who follow the event each year. Months of work go into the event and a number of organizations are involved, like FFA teachers and students, who handle the petting zoo and educational aspect of the Oconto County event.

“Finding a host for next year will start right after this is over,” Rank said. The Oconto County breakfast is June 9 in Lena.

Hlinak is the fifth generation to operate Norman Acres, a farm that traces its start to June 1857. He bought the farm from his parents in 1998 and has some uncertainty over its future with no heir apparent to the operation.

“I might be the last,” he said. “But you never know, as far as this family. Hopefully, there’s someone interested in taking over this farm. It’s in pretty good shape.”