Oconto County, covering an area of approximately 1,000 square miles, is situated in northeastern Wisconsin. It is bounded by Marinette and Forest Counties on the north; Shawano and Langlade Counties and Menominee Reservation on the west; Brown County on the south; the bay of Green Bay on the east. The elonged shape of the County runs on a northwest-southeast diagonal approximately 66 miles long. Oconto, the county seat, lies on the shore of Green Bay, at the mouth of the Oconto River.

The County takes its name from an early Indian settlement bearing the name of "Oak-a-toe", and has since ben changed to Oconto. The peace loving India 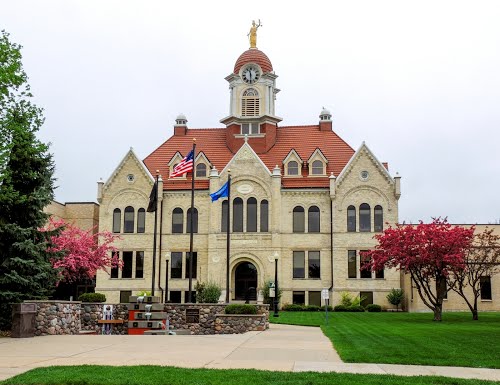 ns were members of the "Menominee" tribe (meaning rice eaters). As their name implies, the diet consisted mainly of wild rice and fish. The first known inhabitants of the Oconto area and Wisconsin are often referred to as the Copper Culture People. Investigation of burial sites discovered near the City of Oconto indicates that these people lived in the region between
and 5500 BC.

Since the Copper Culture People, Oconto County has been ruled by four different nations in its early recorded history: 1) Menominee Indians; 2) the French who claimed the whole region of the Great Lakes in 1671; 3) the English, who took possession in 1760, and 4) the United States which claimed it at the close of the Revolutionary War in 1783.

The first white men came to Oconto County and the Green Bay area in the early 1600's. All of them were either fur traders or missionaries. The first mission, on what is now mainland Wisconsin, was founded in 1669 on Green Bay at the mouth of the Oconto River. It was called the Mission of St. Francis Xavier.

Exploration and fur trading continued for the next 150 years. In the early 1800's, the rich timber resource of the region attracted several adventurous men whose intention was to amass great wealth.

The first sawmill settlement in Oconto County was built at Pensaukee in 1827 on land leased from Menominee Indians for $15 a year and some lumber. In the early 1830's, government surveyors entered the region, followed shortly by George Furwick, who became the first white man to purchase land from the government in what is now the City of Oconto.

The Territory of Wisconsin was established in 1836 and statehood was attained in 1848. On November 4, 1851, the first election was held in what is present day Oconto. It's purpose was for the formulation and naming of the new county from the northern portion of Brown County. The boundaries were established and the Oconto mill settlement was chosen as the county seat. Thus, Oconto County was brought into being.

Oconto continued to progress and prosper as a lumber-town. The 1850 U.S. Census listed the population as 415 "wilderness dwellers". Samuel B. Gilkey's steam powered sawmill utilized a circular saw in 1853 as the first of its kind to appear in the west. In 1854, the first steamboat began to ply the Oconto River, an by the spring of 1855, construction had started on the first state road connecting Green Bay with Menominee to the north.

Oconto was chartered and became a ciy by an Act of Legislature of the State of Wisconsin on March 11, 1869. George Smith, a prominent lumber baron, was elected the first mayor. Shortly after its beginning as a city, Oconto became the site of the world's first Christian Science Church, built in 1866.

At the turn of the 20th century, the City of Oconto had a population of 6,500. The major industries included the Holt and the Oconto Lumber companies, producers of 60 million board feet of lumber per year, and the Oconto Brewing Company. The soil that once yielded millions of board feet of lumber is still the backone of Oconto County's economy. Much of the cleared land has been converted to farming. The remainder has been through several reforestation programs and now is the basis for a multi-million dollar forestry and recreation industry.